The BP Beautiful People program develops collaborations with talented individuals from outside the ballet sector. Providing a diverse range of tips and tricks that range from lifestyle, well-being and nutrition to fashion, beauty, costume design, and more.

The Misery Behind the Beauty: Degas’s Ballerinas

The shocking history behind the magnificent ballerina paintings of Hilaire-Germain-Edgar Degas. 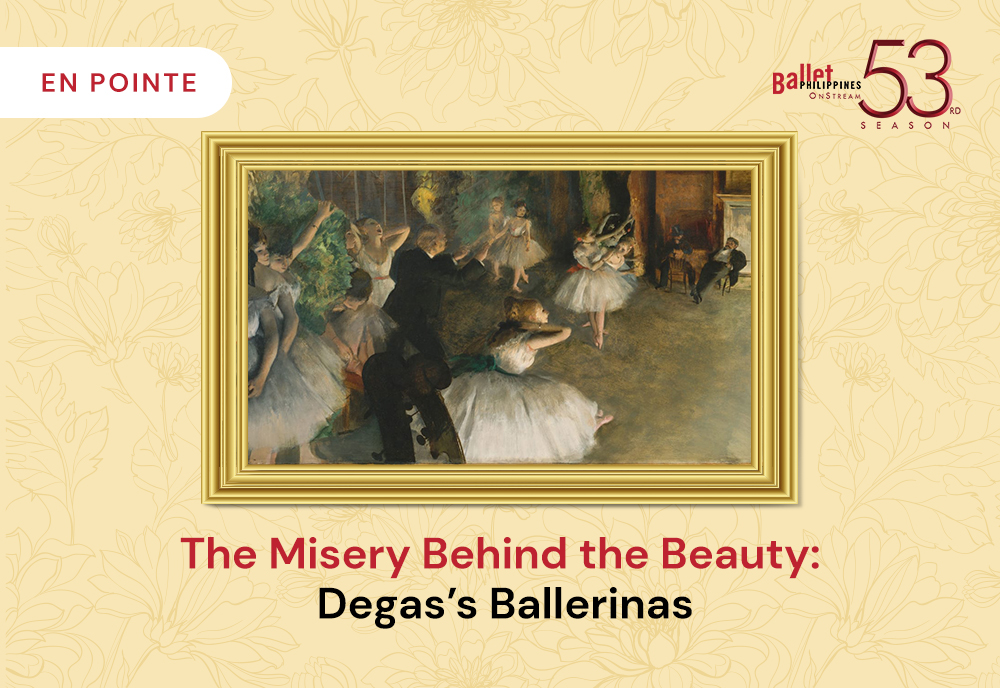 In the late 1800s, Hilaire-Germain-Edgar Degas created over 1,500 artworks featuring ballerinas. His pieces, which ranged from drawings to paintings, are celebrated as some of the most influential in French art. Today, Degas’ work is held in reverence and romanticized as the archetype realism. ​Unbeknownst to most, behind the seemingly gentle brush strokes and elegant subject matter lies a sinister history. Beneath the tutus and porcelain figures on the canvas, is a shocking culture long forgotten.

While Degas’s work seemingly pays tribute to the beauty of the ballet, the artist actually had no interest in the art form of dance. Although he was heavily associated with Impressionists (like his contemporary Monet), Degas considered himself “a realist.” He preferred urban subjects, using his brush to paint images of members from the lower classes of Parisian society. During this period, ballet was not considered high-art. In fact, audiences regarded it as a crude cabaret show, where gentlemen could ogle at the bare legs of young girls. Ballets were never performed in its entirety, with excerpts often relegated as the “half-time” show during an opera’s intermission.

Parisian ballerinas often came from impoverished backgrounds, joining the corps de ballet as children to support their families. “Sex work was a part of a ballerina’s reality, and the city’s grand opera house, the Palais Garnier, was designed with this in mind,” writes art writer and historian Julia Fiore in her article for Artsy.net. “A luxuriously appointed room located behind the stage, called the foyer de le danse, was a place where the dancers would warm up before performances. But it also served as a kind of men’s club, where abonnés—wealthy male subscribers to the opera—could conduct business, socialize, and proposition the ballerinas.” The right gentleman patron could change a young ballerina’s social position considerably. He could improve her standing in the ballet corps by giving her private lessons and a lavish lifestyle.

Degas, an artist interested in social commentary, was fascinated by the sexual politics of the ballet. His work would focus more on the backstage drama, rather than the actual performances. “In his works like L’Étoile (1878), he depicts the curtain call at the end of the performance, with the curtsying dancer bathed in the unflattering glare of the lights. Behind her, a man in an elegant black tuxedo lurks in the wings, his face hidden by the goldenrod curtain,” writes Fiore. In her article The Sordid Truth behind Degas’s Ballet Dancers, Fiore further cites particular examples of the artist’s work ,which portrays the brothel culture that was once very evident in Paris’ ballet scene.

By all accounts, Degas never made sexual advances towards his subjects. His relationship with his subjects were more paternal in nature. However, he was a known perfectionist and misogynist who would speak ill of women. Countless letters and conversations with friends have been recorded, where Degas would make statements such as “women invented the word ‘suffering.’”He also referred to his ballerinas as “his little monkey girls”, and often ignored their physical exhaustion after posing for hours on end. While he is a complicated and problematic figure, it is undeniable that Degas’s iconic ballerina paintings shed light on a part of history long forgotten. His expressive brush strokes reveal the misery and despair of a lost generation of women.

For further studies, read “The Sordid Truth behind Degas’s Ballet Dancers”, written by Julia Fiore for Artsy.net, in collaboration with CNN.